Detection dogs are widely considered the most effective and adaptive method for explosives detection. They can be used as single purpose dog or as dual purpose dog. Bomb sniffing dogs became more in demand, since the world faced several terrorist attacks.

Our explosive detectors are the answer to the increase in emerging sophisticated threats are accelerating the demand for highly capable explosives detection, causing a strain on available supplies of quality canines worldwide.

These strains are further compounded by rigorous behavioural standards required to meet mission-specific capabilities, leading to high rates of dogs disqualified from training or deployment.

Police Dogs Centre Holland conducts regular research and explores the behavioural characteristics important for more specialized tasks such as detection of explosives and this allows us to be able to supply the quality and calibre needed for such disciplines as K9 Explosive detection dogs.

In our reviews, we aim to identify the behavioural characteristics important for operational tasks of explosives detection dogs, contrasting with that of other working roles and highlighting key differences between explosives and other types of detection dogs.

Further, we review the available research on methods for assessing and selecting candidate detection dogs and make recommendations for future directions and applications to the industry.

Improvements and standardization in assessment technology allowing for the identification and enhancement of behavioural characteristics will be key to advancing canine detection technology in general. 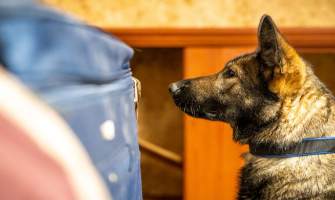 Training explosive detection dogs is an important task. At PDCH facilities, we strive to ensure that all our assets are selected for the client’s specific intentions for the future role of the canine, EDD is a general vocation defined by the class of targets to be detected (explosives) that implies some, but not all or even the predominant, capabilities necessary for performing the range of different EDD tasks.

Explosive Detection Dog tasks are more specifically defined by the parameters of the context and details of the search task. In many cases, the characteristics necessary for these varying EDD search tasks are the same but may vary significantly in the needed degree of expression.

Traditionally, the most general EDD (sometimes referred to as “standard” EDD) is a dog that searches an array of areas at the immediate direction of a handler, most often but not exclusively on lead. Such areas include the interior and exterior of varied types of buildings, road vehicles, limited open areas (e.g., a park), and articles such as luggage and boxed goods.

More specialized EDD dogs applications are extensions of these general tasks and are often more focused on a particular search task, the context in which that search occurs, or the mode by which that search is performed.

As mentioned, specialization is increasing as a consequence of the growing sophistication of EDD dogs applications with some fairly well-defined specialties.

Some specializations are less well-recognized at this time, but becoming increasingly defined by the search task to be performed, such as cargo screening. Of course, many military working dogs (MWD) and law enforcement EDDs are dual-purpose or multi-purpose canines employed for multiple tasks including protection/apprehension or tracking, but these additional tasks are beyond the scope of this review; suffice to say that some specialty EDD tasks, such as the screening of persons, may be less compatible with dogs having the propensities necessary to perform these additional non-EDD tasks.

Specialization may be contextual in nature requiring that dogs exhibit characteristics particularly well-suited for working in particular conditions. This may be the case, for example, of EDDs for maritime operations working on and transferring between vessels, working in the confined spaces of those vessels, and in the loud environment of the engine rooms of those vessels.

Some dogs that may not be behaviourally well-suited for particular tasks may possess very suitable characteristics for other tasks. For example, dogs unable to work in large crowds of people may be capable of specializing in interrogating cargo, where other characteristics, such as the ability to search vigilantly for long durations, has primacy.

Such parameters may translate to the intrinsic propensity of a dog to engage in meticulous sniffing without which it may be difficult to condition it to detect trace levels of explosives or the PBIED EDD that may require an intrinsic propensity for air-scenting behaviour as contrasted with ground- or object-scenting to perform the task successfully.

In the current security climate, the use of explosive detection dogs or sniffer dogs is becoming increasingly more in demand from many industry sectors. The benefits of utilising detection dogs (sometimes called bomb dogs, sniffer dogs), to increase the protection of your staff and premises are tangible in that that they are effective, efficient and extremely versatile.

Specially trained dogs can be used to detect explosives using their noses which are very sensitive to scents.
These dogs are trained to identify the scents of explosive materials and notify their handler when they detect one of these scents.

The dogs indicate the source, by taking ⁠generally a passive response, such as a sit, down, stand and stare to alert the handler of the presence of a target substance.

How are dogs trained to detect explosives ?

Our EDD teams can be widely used across different areas.

The dogs can either be classed a green, suitable for the client to train as an EDD through to being totally trained for explosive detection work with basic obedience. Indication is done by letting the dogs take ‘a sit’ position after detecting explosive material.

What explosives can dogs detect ?

Our explosive detection dogs are trained on 12 basic odours, which allows them to detect IEDs (Improvised Explosive Devices) of different types and compositions of explosives.

Police Dogs Centre Holland offers different breeds of dogs that can be used as explosive detection dogs. The most common breeds used are :